Clover[2] is the given name of an underwater life form that appears in Cloverfield and Cloverfield/Kishin. The creature was created by artist Neville Page and JJ Abrams.

The monster came from the Atlantic Ocean, where it was awakened by Tagruato submarines sent down from Chuai Station to investigate. The monster rampages throughout Manhattan, destroying the city in its path. This destruction causes the United States government to sacrifice New York City in an attempt to kill the monster with heavy ordnance in the Hammerdown protocol. Before that, the monster killed Jason Hawkins, crushing him with its tail on the Brooklyn Bridge; its parasites bite Marlena Diamond, causing her to explode from the central cavity; and it bites Hud Platt in half just moments before the Hammerdown protocol.

The monster's origins are only revealed in the film's viral marketing campaign (Abrams wanted the movie to be realistic; if a monster did attack, civilians would have no idea where it came from), leaving some who have seen the film confused about where it really came from. Many speculate that it is of extraterrestrial descent, but this has been denied by J.J. Abrams. The object seen falling into the ocean is actually the Japanese government's ChimpanzIII satellite.

The monster is a deep-sea creature with an unknown evolutionary history. The species apparently has a very long life-span, as the creature is still an infant during the events of the film, regardless of being alive for thousands of years. It grew to its massive size through consuming large amounts of Seabed's Nectar, a natural steroid-like substance which is very addictive and causes increased cell division and growth, and is used by Tagruato's subsidiary company, "Slusho!", for use as their secret ingredient in their frozen drink of the same name. At some point afterward, the monster went into a sort of hibernation.

The monster was first discovered by one of Tagruato's marine biologists, Kazui Ichigawa. Tagruato later stole his laptop and files and killed him and his family while they were on vacation in Daisetsu-San National Park, covering the assassination up as the result of a gas explosion in their trailer. Later, they used this information to locate the monster and built the Chuai station over top of it, claiming (falsely) that they were drilling for oil there.

Shortly before the rig was supposed to open, Tagruato sent several submarines from the station down six miles to the ocean floor to study the monster. This action disturbed the creature from its slumber, and in a fit of rage and fear it destroyed the station, then proceeded towards Manhattan.

The creature, upon arriving to New York City, attempts to eat the Statue of Liberty's head, then throws it into the city when it realizes the head isn't edible. Though initially confused, the military's subsequent attacks frighten and later enrage the monster. For approximately five hours and fifty-seven minutes,[3] it rampages throughout the city, destroying landmarks and battling the military.[4] News companies were able to get their news choppers into the air to report the event, but after several choppers were taken down by the creature, the military suspended all news chopper activity. Evacuations of people and resources from the city were successful, and it is estimated that approximately 1.4 millions residents and visitors were evacuated by tunnel, helicopter and bridges, in which 350,000 of those residents and visitors were evacuated via the Holland Tunnel. By 0600 (6:00 AM), 78 successful airlifts from Manhattan had been completed, with only 2 choppers going down.[5] After several failed attempts to kill the monster, the government approves the military execution of the HAMMER-DOWN Protocol at 0442 hours (4:42 AM), 120 minutes before execution, in a last ditch effort to destroy the monster.[5]  120 minutes later, United States military aircraft flew over Manhattan, deploying their weapons to ultimately kill the creature. [6]

According to film producer J.J. Abrams, the creature is officially "...a baby. He's brand-new. He's confused, disoriented and irritable. And he's been down there in the water for thousands and thousands of years".

The monster is a 240-300 foot high[7] quadruped with long tri-fork finned tail. The uppermost double-jointed limb pair is longer than the other two, ending in a multi-fingered hand which can bend backward so that the creature can walk on its fingers. The double-jointed, squat legs are powerful enough to support the creature’s mass, and yet still allow it to move relatively quickly for an organism of its size. Each of its feet is 30-40 feet in length, roughly the size of a city transit bus.[7] The creature is covered in gray skin that exhibits a white pallor, possibly due to an absence of light on the ocean floor. The skin is also host to thousands of dog-sized parasites creatures.

Its head has sharp, bony features and two eyes with pupils large enough to almost obscure their requisite sclera from view. Its face resembles that of a piranha or an angler fish. There are a set of membranous sacks on either side of the head behind the eyes, which inflate and recede back into the head. Some speculate them to be "ear membranes", much like those of a frog. Some fans have speculated that they are filled with some type of fluid to help it adjust to the different pressures it encounters on land. Others say they help the monster breathe the air which would be thin to it, due to its large size.

Tucked between the monster's legs are two "external esophogi". The esophogi are used to eat creatures much smaller than itself (humans and any other large animals). In the Cloverfield/Kishin manga, the monster's external esophogi are shown using long, thin tubes to wrap around the victims and bring them in, though how much the manga can be trusted on these matters is unclear. The esophogi were first clearly seen when Hud looks up at the monster before it bites him. Fans originally misinterpreted the tubes to be limbs before their true nature was revealed. The esophogi end with teeth-like projections. It devoured several dozen Central Park carriage horses with, as well as (most likely) the people that Marlena mentioned the monster was eating when it moved down Broadway.

The creature's skin showed a strong resistance to projectile weaponry, due to the immensely high resistance deep-sea creatures have shown against heat and pressure due to their environmental conditions. Shells from M1A2 tanks and M109A6 Paladins,  AT-4 rockets and FGM-148 Javelin missile launchers, AGM-65 Mavericks and Mk-82 bombs and other high powered ordnance failed to do anything other than aggravate and frighten the creature.

The Monster's diet covers a large array of foods. The first hint at the monster's diet was when a photo of whales the monster had partially consumed appeared on 1-18-08.com. In Cloverfield, Marlena says she saw it "eating people". The exterior esophogi are the right size to consume humans, among other things. Other amateur video footage of the Cloverfield event reveal that the monster was also seen eating multiple horses at the same time with these tubes. However, it also eats humans with its mouth, as it bit one of the main characters in half.

These are all estimations by the U.S. Department of Defense[1].

The monster is never truly named in the film, but the nickname "Clover" (used by film's crew) is generally accepted by fans. In the Blu-Ray release of the film, the notations state that the United States Department of Defense has code-named it "LSA", which stands for "Large Scale Aggressor". Other names were given by the fan community: 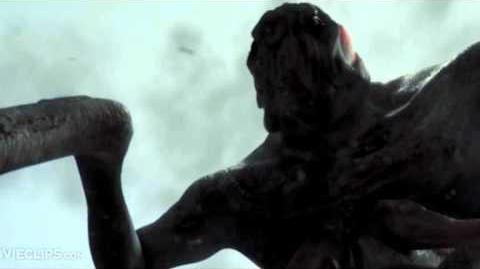 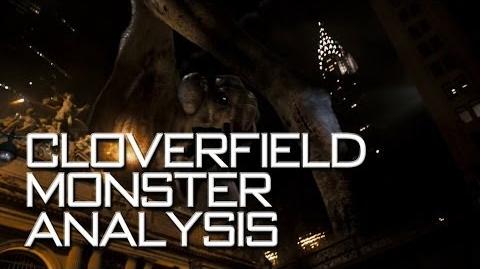 Retrieved from "https://cloverfield.fandom.com/wiki/Cloverfield_Monster?oldid=7481"
Community content is available under CC-BY-SA unless otherwise noted.